A sanitation worker became the first Indian to receive a Covid vaccine as the country began the world's largest inoculation drive.

He paid tribute to front-line workers who will be the first to receive jabs.

India has recorded the second-highest number of Covid-19 infections in the world after the United States.

Millions of doses of two approved vaccines - Covishield and Covaxin - were shipped across the country in the days leading up to the start of the drive.

"We are launching the world's biggest vaccination drive and it shows the world our capability," Mr Modi, said, addressing the country on Saturday morning. 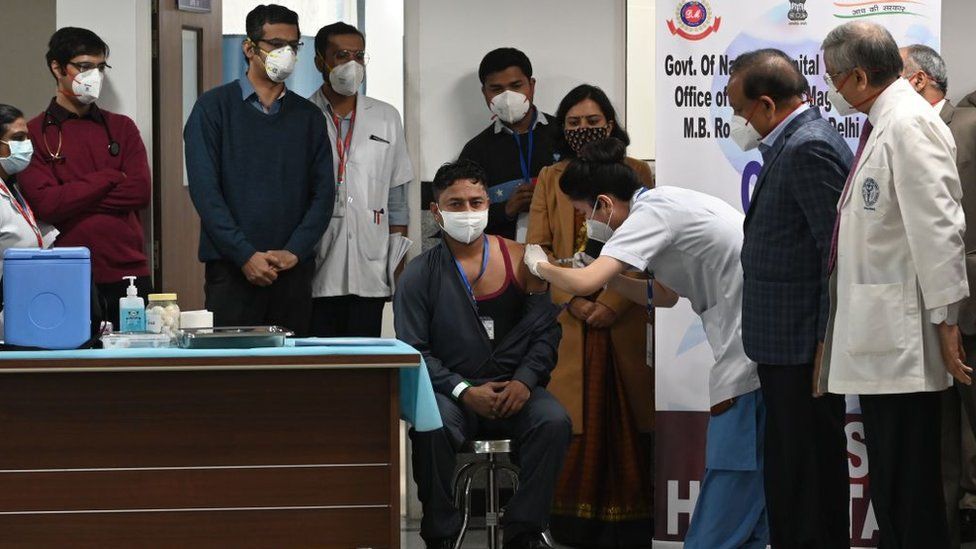 He added that India was well prepared to vaccinate its population with the help of an app, which would help the government track the drive and ensure that nobody was left out.

Mr Modi spoke at length about doctors, nurses and other front-line workers "who showed us the light" in "dark times".

"They stayed away from their families to serve humanity. And hundreds of them never went home. They gave their life to save others. And that is why the first jabs are being given to healthcare workers - this is our way of paying respect to them."

Doctors and medical staff at Delhi's Max hospital tell me a lot of hope is being pinned on the vaccination drive. One official described it "as a new dawn" and said "it's the beginning of Covid's end".

Inside the waiting room, there are posters on the wall with information about the documents one needs to bring, how safe the vaccine is, and the precautions that need to be taken even after one's been vaccinated. Among those being vaccinated on Saturday are doctors, nurses and front-office staff from all departments.

The names have been been chosen alphabetically so those getting jabs are mostly those with names starting with the letter A.

"The pandemic has played havoc in the country. I hope the vaccine will rid us of the fears and we will be able to breathe easy," Dr Anil Dass said after getting the jab.

Ashutosh Chaturvedi, a 31-year-old male nurse described as a "Covid warrior" by hospital officials, became the first recipient of the vaccine at Max.

"I'm fine, I feel good," he told reporters as he came down the hospital ramp, which has been decorated with blue, green and white balloons.

Since April, he told me, he's worked in the emergency wing of the Covid ward, tending to those afflicted with the coronavirus.

"I haven't seen my wife and nine-month-old daughter since then. A month later, once I've received the second dose, I'll visit my family," he said.

Mr Modi also appealed to people to continue adhering to Covid-19 safety protocols like wearing masks and following social distancing. He said the country cannot afford to be complacent as vaccinating the entire population will take time.

He also urged people not to believe any "propaganda and rumours about the safety of the vaccines".

"I want to tell people that the approval to these vaccines was given only after scientists and experts were satisfied about its safety," he said.

An estimated 10 million health workers will be vaccinated in the first round, followed by policemen, soldiers, municipal and other front-line workers. 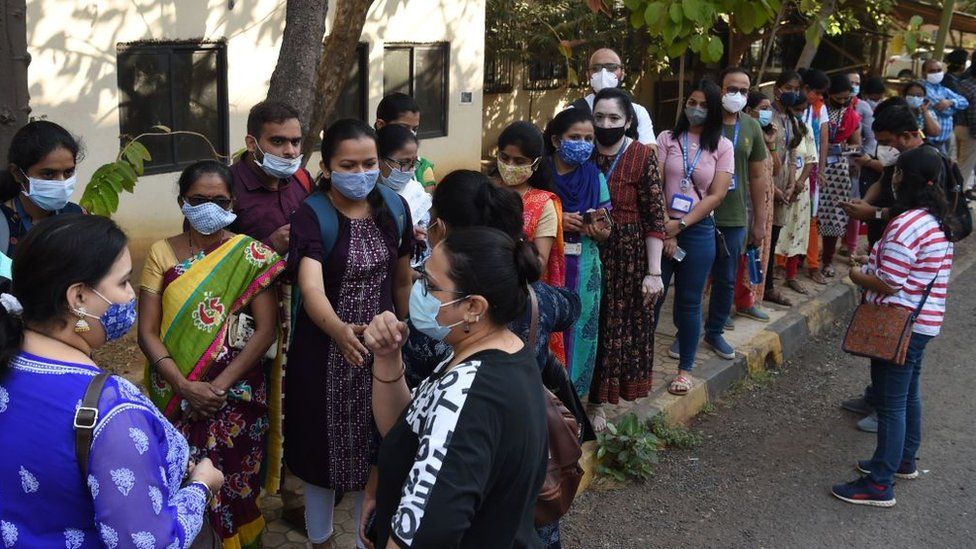 Next in line will be people aged over 50 and anyone under 50 with serious underlying health conditions. India's electoral rolls, which contain details of some 900 million voters, will be used to identify eligible recipients.

Several hospitals across India are giving the first doses of the vaccine. 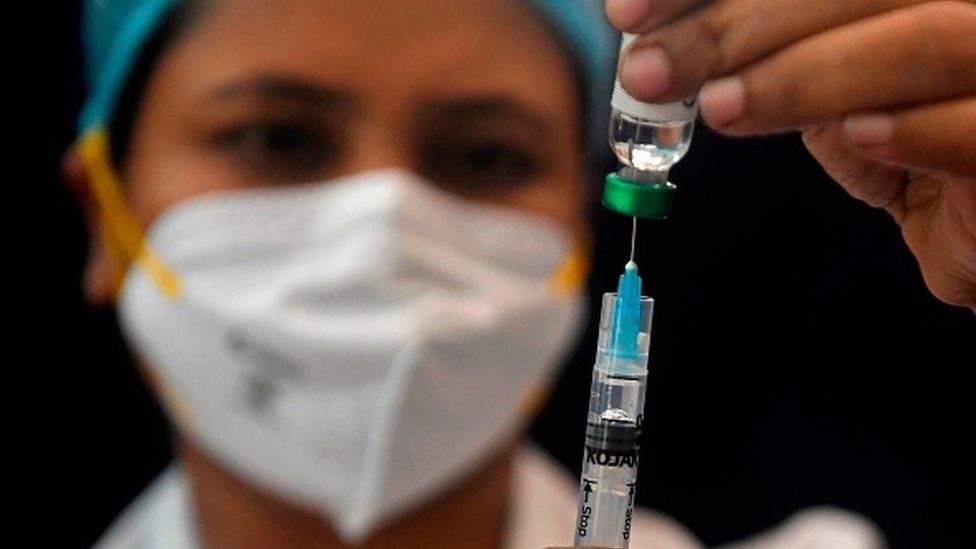 Dr Atul Peters was among those who got the jab at Max hospital.

"It's a very big day. I'm grateful to those who worked hard to make this a reality. I was very very happy when I got a call informing me that my name was on the list.

"We worked hard during the pandemic to save lives and we are also taking the jab first to dispel fears in people's minds that the vaccine is not safe," he told the BBC. 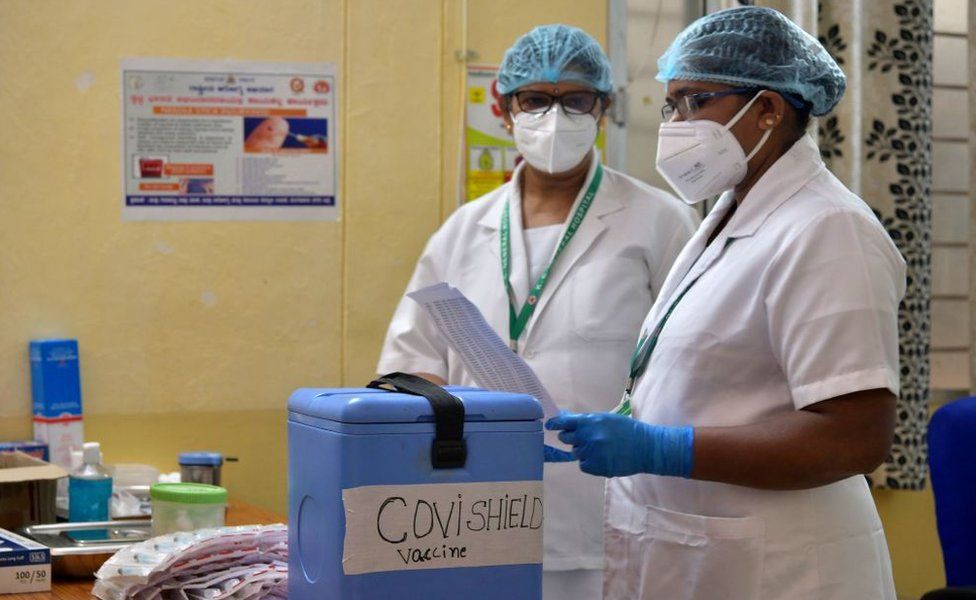 image captionMillions of vaccine doses have been shipped across India

India's drug regulator has given the green light to two vaccines - Covishield (the local name for the Oxford-AstraZeneca vaccine developed in the UK) and Covaxin, locally-made by pharma company Bharat Biotech.

But concerns have been raised over the efficacy of Covaxin because the regulator's emergency approval came before the completion of Phase 3 clinical trials. The regulator and the manufacturer have said the vaccine is safe, and that the efficacy data would be available by February.

Both vaccines will be given as two injections, 28 days apart, with the second dose being a booster. Immunity would begin to kick in after the first dose but reaches its full effect 14 days after the second dose.

The status of the vaccines and recipients will be electronically tracked in real time - some 8 million people who will receive the early jabs have been already registered. More than 600,000 people have been trained for the drive.

The jabs will be voluntary, and recipients will be given a certificate of vaccination after they complete both doses.

"I expect India's vaccination programme will be run much better than most countries because of the considerable government investment and early preparedness," Dr Gagandeep Kang, one of India's best-known vaccine experts, told the BBC.

With more than 10 million cases, India has recorded the second-highest number of Covid-19 infections in the world, after the US.

The largest vaccination drive in the country, however, begins at a time when infections have fallen sharply, and much of life has returned to normal. A limited availability of doses in the initial phase, therefore, is not likely to pose a problem.

Most scientists feel India is primed for the challenge as it is a vaccine-making powerhouse and has run, for decades, a well-oiled immunisation programme for tens of millions of new-borns and mothers-to-be.

But the real challenges will begin when the general population starts receiving the jabs.

India will use its formidable election machinery to deliver and track doses to recipients in far corners of the country. It is also likely to use digital platforms and apps to enable people to register for the doses.

However, not every Indian owns a smart phone or knows how to operate an app, so it will be interesting to see what the government does to make sure that there are no inadvertent exclusions.

Vaccine hesitancy is the other concern. 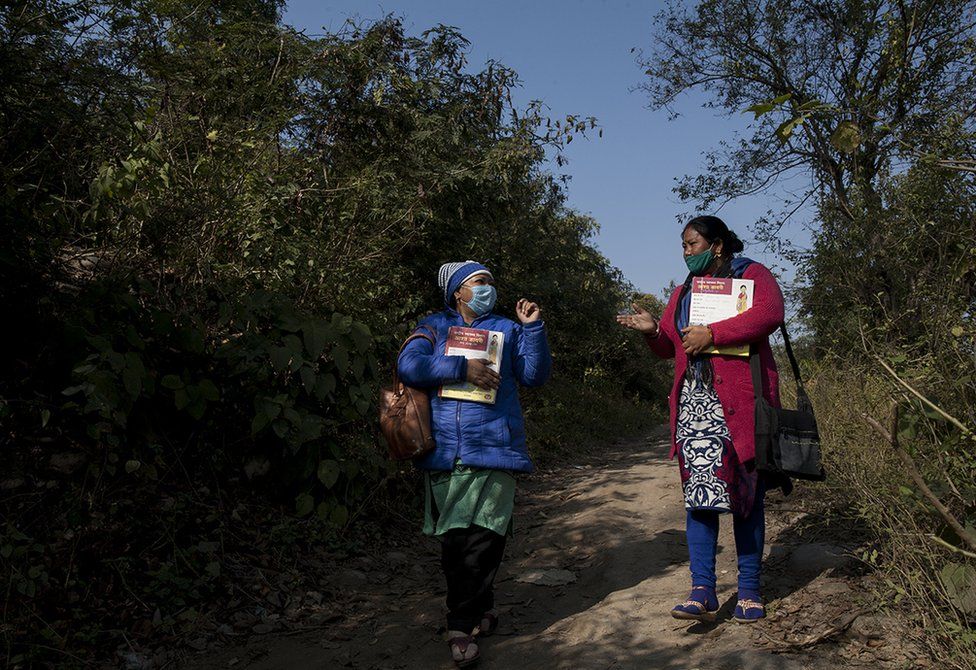 The recent controversy over the hurried approval of Covaxin, many feel, could undermine confidence. There's a history of hesitancy about receiving the polio vaccine in parts of northern India, triggered by rumours about vaccines being impure and affecting fertility. Similar disinformation is now circulating about Covid vaccines on social networking apps, such as WhatsApp.

The government will need consistent, clear-eyed communication to bolster vaccine acceptance and community perception of the programme.

Vaccines come with side effects for some people. India has a 34-year-old surveillance programme for monitoring such "adverse events" following immunisation.

But researchers have found that benchmarks for reporting side effects still remain weak. A failure to transparently report adverse effects could easily lead to fear-mongering around vaccines.

Online Gravitational Acceleration Calculation and how to find it?

- hings fall because of gravity. Gravity is fascinating electricity among the whole thing that has mass. It is one of the simple powers of nature. Gravity

- RETURNING TO PHYSICAL activity following any serious illness can be a difficult and frustrating process. You just want your body to behave and perform like it used to, but the reality is that, dependi 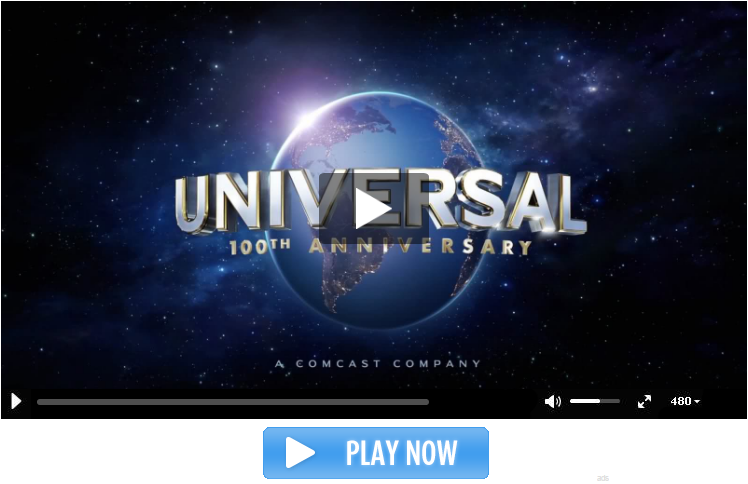 - Western films made in Italy are called Spaghetti Westerns. Some films can also use Western plots even if they are set in other places.