Coronavirus: What Europeans have learned from a year of pandemic


From the first case diagnosed a year ago at a hospital in northern Italy to the empty shops, restaurants and stadiums of Europe's cities, the lives of Europeans have been changed forever.

Curbs on movement have forced every country and society to adapt its rules and rethink its culture. There have been hard truths and unexpected innovations in a year that changed Europe.

Restrictions are tough for societies used to freedom 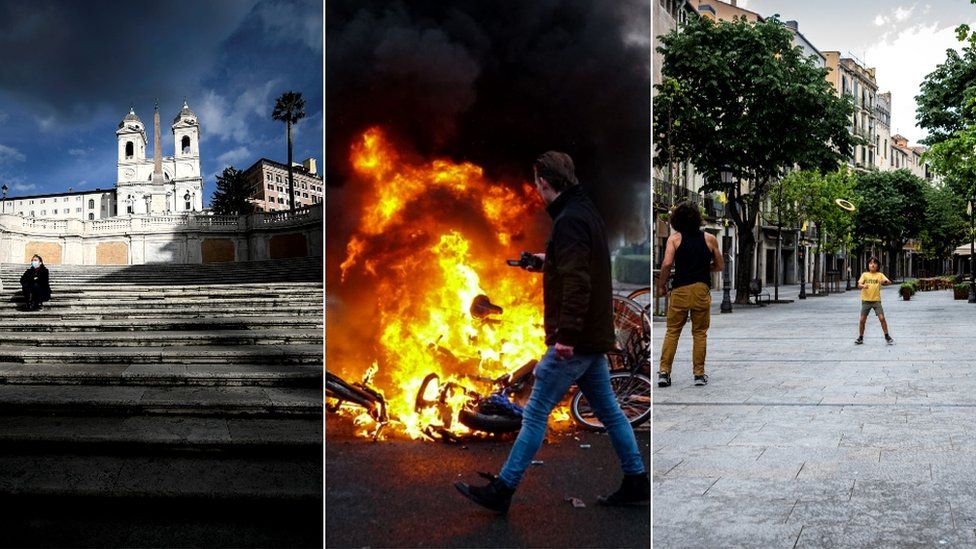 image captionWhile the streets and tourist sites of Rome and Barcelona came to a standstill under lockdown, a curfew triggered riots in Dutch cities

Spain's lockdown was among the harshest in Europe, says Nekane Balluerka Lasa, professor of behavioural sciences methodology at the University of the Basque Country. Isolation was particularly hard for older people and lower-income families, especially if there was no nuclear unit. Spaniards are used to social interaction. Infections came down, but the economic cost was very high and the main lesson was the impact on people's mental health. Maybe that explains why it wasn't possible to keep it going. Our study found that 46% of people felt grave psychological distress.

Italians were initially frightened into uncharacteristic obedience, says BBC Rome correspondent Mark Lowen. They were the first to be crushed by the virus, the first to see intensive care units close to collapse, and friends and family dying. Very widespread respect for restrictions began to change with the second wave, with some protests against renewed lockdowns, given the fear and fatigue.

The Dutch didn't have a lockdown until December, but when a curfew was imposed in January, riots broke out, says BBC Hague correspondent Anna Holligan. Tensions had been festering. The unrest exposed an undercurrent of resentment across generations and came after a childcare allowance scandal had brought down the government. Most accepted the lockdown, but those already frustrated felt emboldened after the government had broken its own rules.

Germany's initial strategy was to test widely and then track and interrupt chains of infection, says BBC Berlin correspondent Jenny Hill. It worked until cases spiralled last autumn. The vast majority of Germans support lockdown measures, surveys suggest. But there has been furious resistance from some, who have protested, usually without masks or social distancing. Some are simply concerned by the impact of lockdown restrictions, but the protests tend to bring together conspiracy theorists, anti-vaxxers and far-right activists.

Slovenia has endured some of the tightest restrictions in Europe, and yet it has one of the world's highest death rates, says BBC Balkans correspondent Guy Delauney. Internal travel was banned from October until mid-February, most shops were shut and schools went online. Epidemiologists are baffled, but people here suspect that private socialising continued despite the emergency measures.

Sweden avoided a lockdown and built its strategy largely around voluntary social distancing guidelines, says BBC reporter Maddy Savage in Stockholm. The public largely complied at the start but, as cases spiked during the second wave, compliance got slacker. Tighter guidelines came in on alcohol sales and customers in bars and restaurants. But it wasn't until the turn of the year that a new pandemic law gave ministers greater powers to limit numbers in shops and on long-distance trains and buses.

Experts are essential, but mistakes have been made 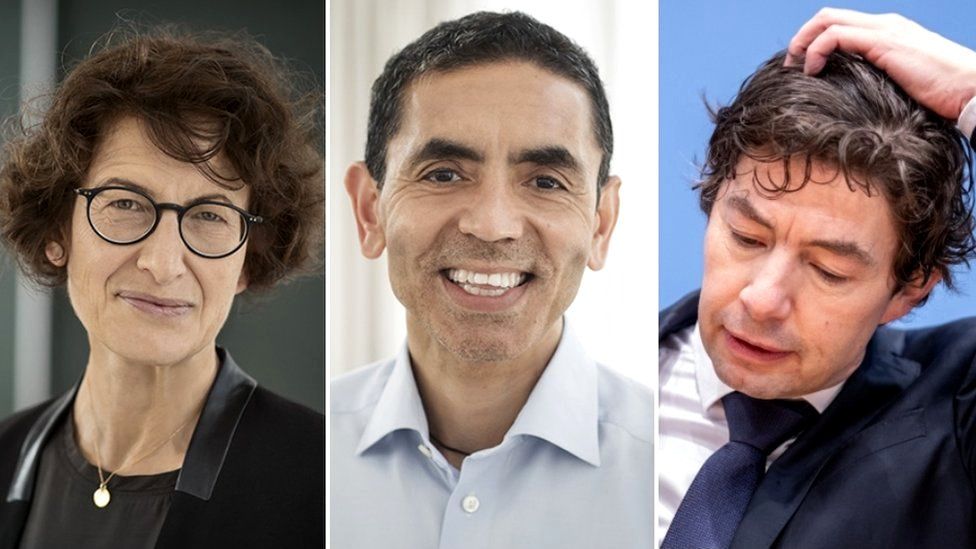 image captionÖzlem Türeci (L), Uğur Şahin (C) and Christian Drosten are among the German scientists who are now household names

The pandemic inspired a new-found, national respect for German scientists, says the BBC's Jenny Hill. Virologist Christian Drosten is now a household name, as is Lothar Wieler, who runs the Robert Koch Institute that advises the German government. So are the married BioNTech founders Uğur Şahin and Özlem Türeci, who developed the first approved vaccine. Chancellor Angela Merkel, who studied quantum chemistry herself, is heavily influenced by the opinion of Germany's scientific community which, in the main, urges restrictions and caution. But the response to the pandemic has increasingly been characterised by squabbles among regional leaders, some of whom demand fewer restrictions on daily life.

Sweden's state epidemiologist Anders Tegnell has largely been the public face of the country's response to the pandemic, says Maddy Savage in Stockholm. Previously a low-profile bureaucrat, he quickly became a well-known and polarising figure both at home and abroad. Early on in the pandemic polls suggested 75% of the population backed the public health response. But that dropped to 50% as cases rose and tougher restrictions came in. His face appeared on T-shirts, while critics sent his family death threats.

Internationally, scientific advisers were called in but no-one thought to ask the experts on old age, says Ingmar Skoog, head of the Centre of Ageing and Health in Sweden. Half of all deaths in Sweden's first wave were in care institutions and another quarter had home care. It's very difficult to stop the virus coming into care homes as most people need a lot of help, but we didn't have enough protective gear. Most often it's not relatives who bring the virus into care homes; for six months we had a no-visit rule. So you had an 83-year-old man not allowed to visit his wife of 60 years. It's been suggested that may have been illegal.

Italy has picked experts for key jobs in the new government, says Mark Lowen in Rome. Initially ex-Prime Minister Giuseppe Conte had very high approval ratings, but old political divisions surfaced over how to manage the second lockdown and rebuild the economy. He fell and now technocrat Mario Draghi, ex-head of the European Central Bank, is in charge with experts running finance and education and a new ministry for ecological transition. There's a feeling opportunities to transform Italy had to be given to figures transcending political divisions.

While Serbia has had spectacular success with its vaccination programme, neighbouring Bosnia has suffered, says Guy Delauney. Bosnia has no strong, centralised leadership and tackling coronavirus has largely fallen to the two semi-autonomous regions, which have not covered themselves in glory. The prime minister of the Federation entity, Fadil Novalic, is due to stand trial over the award of a contract to procure ventilators to a fruit-processing company. And Bosnian health workers are more likely to get vaccinated in Serbia, where border centres have offered them a jab.

The EU wasn't set up for a pan-European health crisis 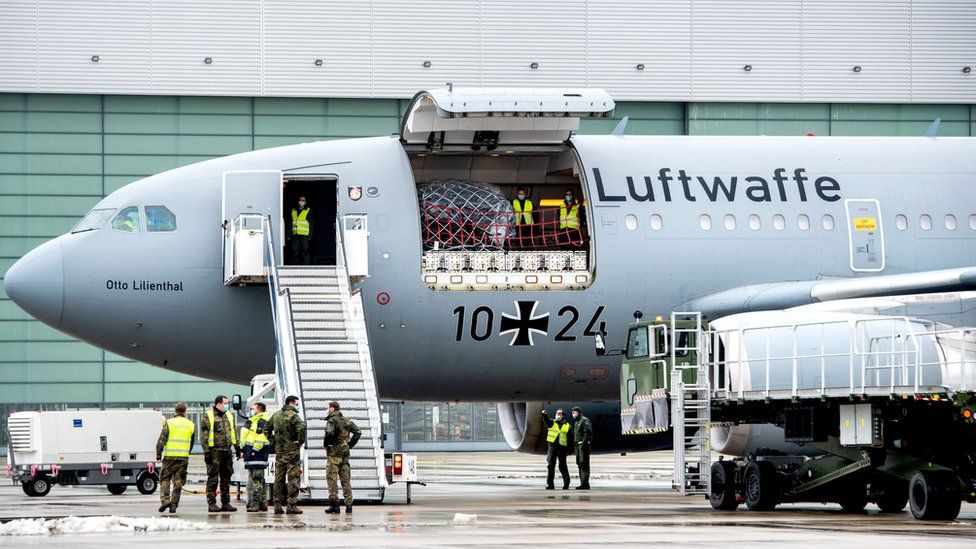 The European Union was not well prepared, although it's far from unique in that, says BBC Europe correspondent Kevin Connolly. It did what it could to co-ordinate action - by creating "green lanes" at closed or crowded borders, to facilitate the flow of medical supplies. But it couldn't do much about the way individual states competed for PPE. Rich countries like France did much better than poorer ones like Bulgaria.

There was local co-operation when health systems were overwhelmed: patients were moved over the French border to hospitals in Germany; and recently Portugal received help from Germany and Austria. But it's perfectly possible such aid could have happened if the EU had not existed. The European Commission's really important attempt to ensure its own centrality in European life has been to take over the vaccine procurement programme from EU member states. This is a field in which it has no experience and it has not, so far, done well. A failure on vaccine procurement and rollout would create a major political problem. 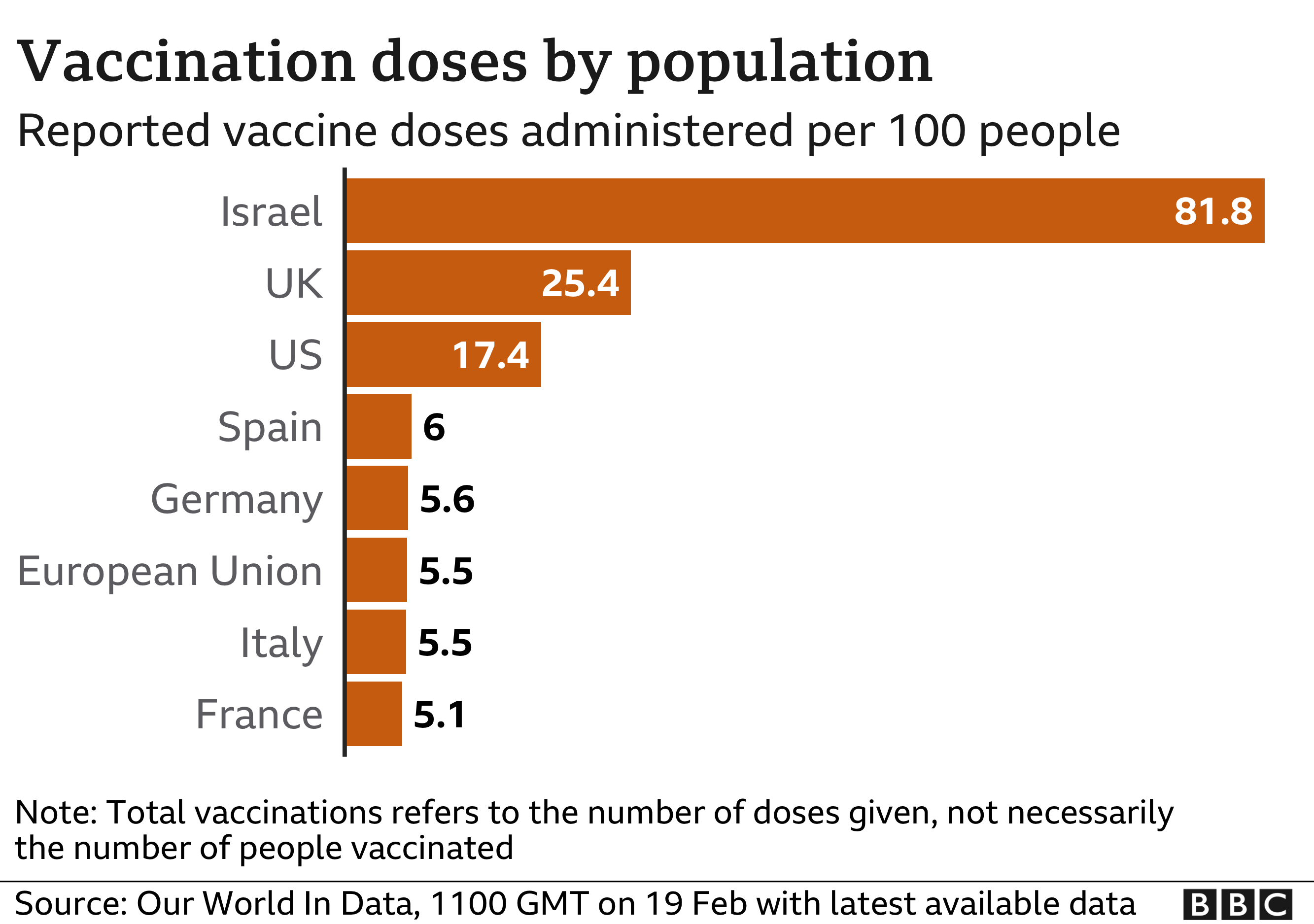 Societies have responded in different ways

Hungary's birthrate has fallen, says BBC Budapest correspondent Nick Thorpe. Three thousand more babies were born in 2020 than in 2019, largely because of the conservative Fidesz government's generous tax incentives to couples to have more babies. But birth numbers began to fall in November and then fell further in December and January - the first months when a Covid impact could be registered. Government supporters draw comfort from the fact that the marriage rate continues to rise and abortion rates have plunged.

Spanish women have had it tougher, says Prof Nekane Balluerka Lasa. Several studies have shown that in families where both men and women work outside the home, women spend much more time caring for dependent elderly people and for their children. This may explain why the psychological discomfort of women during the pandemic was greater than that of men.

Ageism in Sweden has increased, says Prof Ingmar Skoog. There are 1.5m people in Sweden over 70 and the authorities went out and said they couldn't take care of themselves. But older people are completely different from 30 or 40 years ago: we talk about 70 as the new 50. Those who did not have carers only accounted for 10% of deaths.

Italy's long-entrenched brain drain has partially reversed, says Mark Lowen. More than five million Italians live abroad, up by more than 75% in the past 15 years, with the largest rises among high school and university graduates. While successive governments have tried to tempt them back, it's the pandemic that seems to have had a bigger impact in persuading Italians to return, to be with their families. The challenge now will be to keep them here.

media captionWhich face covering is be

- Buying a new laptop is a not an easy adventure since there are a vast variety of laptops in the market. The amount of times

Get Absolute Success in the 500-701 Exam at First Attempt:

- IF YOU HAVE ANY OBJECTIONS, YOU MAY DISCONNECT AT THIS TIME. I WILL NOW INTRODUCE YOUR CONFERENCE HOST

- Vision and inspection systems are also known as machine vision systems. Inside the company globe of now, you either have