Businesses and TV personalities have offered more than $300,000 (£224,000) to catch those responsible for a camper van blast in the US city of Nashville.

The explosion rocked the city early on Christmas Day, injuring three people and knocking out communications systems across the state of Tennessee.

A person of interest, connected to the vehicle that exploded, has been identified, CBS News reports.

No motive has yet been established for the explosion, and no-one has yet said they were behind it.

Possible human remains were later found near the blast site, US media report.

Businessman Marcus Lemonis is the latest to donate to a reward pot, pledging $250,000.

"We can't have our streets terrorised like this," tweeted Mr Lemonis, who hosts reality TV show The Profit.

Reward pledges began on Friday after a local tourism body, Nashville Convention & Visitors Corp, made an initial contribution of $10,000, later increasing it to $35,000.

Fox Sports host Clay Travis and a shop located near the explosion have also offered a combined $30,000 for information.

What happened in Nashville?

Officers responded to reports of gunshots just before 06:00 local time (12:00 GMT) on Christmas Day in an area of the city known for its restaurants and nightlife.

Shortly afterwards, they found a camper van broadcasting a warning message to leave the area.

The van exploded a few minutes later, the force of the blast knocking an officer off their feet, police said.

It is unclear if anyone was inside the camper van at the time.

Police have now released this image of the van - described by Nashville police as a recreational vehicle (RV) - arriving at the scene early on Friday.

The van blew up outside a building belonging to the telecoms giant AT&T, which also occupies an office tower nearby.

Buildings suffered structural damage, windows were blown out, and trees were felled. Videos posted on social media showed water from damaged pipes running down walls as alarms howled in the background.

Police emergency systems were knocked out across the surrounding state of Tennessee.

Flights out of Nashville International Airport were briefly halted as a result of damage done by the blast but have now resumed.

A number of people have been taken to the central police precinct for questioning, a spokesman told the Associated Press.

The FBI is leading the investigation and agents from the Bureau of Alcohol, Tobacco, Firearms and Explosives are involved.

In a tweet Tennessee Governor Bill Lee pledged to supply "all of the resources needed" to investigate what happened and who was behind it.

The White House said President Donald Trump has been briefed on the matter. 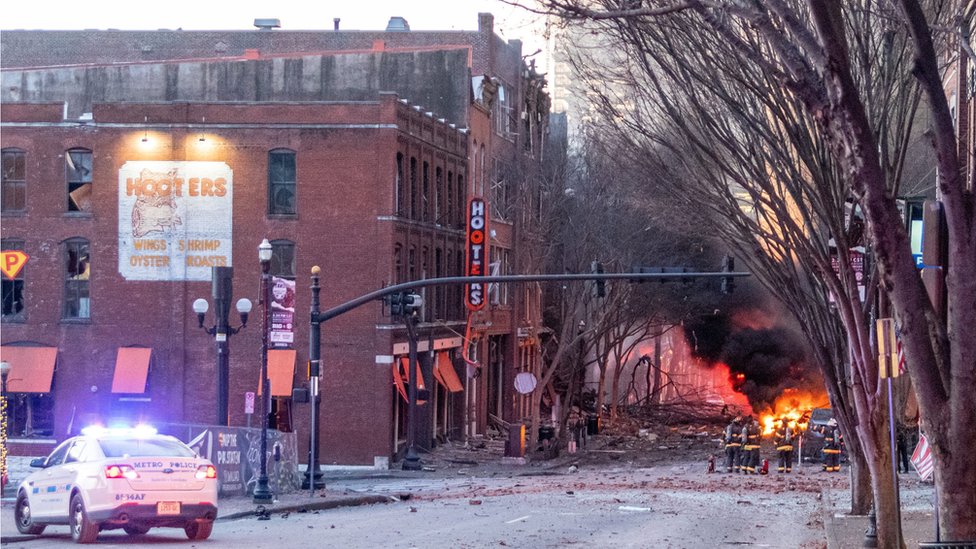 Resident Buck McCoy said he was woken up by the blast. He posted a video on Facebook, showing some of the damage done, with alarms howling in the background.

"All my windows, every single one of them got blown into the next room. If I had been standing there, it would have been horrible," Mr McCoy told AP. "It felt like a bomb. It was that big."

You can get ready for your IT 200-301 exam perfectly with 200-301 Dumps and get guidance from experts at DumpsResources.com

- pass your Cicso Exams With latest Exams dumps From DumpsResources.com