Red squirrels, socially distant by nature, teach us the value of good neighbours


Red squirrels, socially distant by nature, teach us the value of good neighbours

Erin Siracusa receives funding from the American Society of Mammalogists, the Arctic Institute of North America, the Natural Sciences and Engineering Research Council of Canada, and the National Institute of Health.

In the far reaches of Canada’s North, there’s a different type of social distancing happening this year. Amid the lingering snowdrifts and bowed branches of spruce trees, a small mammal yells a ferocious “stay away!” call that can be heard more than 100 metres away.

These “rattle” calls are made by a species abundant in the boreal forest — the North American red squirrel — and send a clear message to other neighbouring squirrels: “This is my territory. Stay off.”

Despite being small in stature, red squirrels are known for their ferocity. Both males and females occupy individual territories with a cache of food resources at the centre called a midden. These food resources are critical for red squirrels to survive the long cold Yukon winters and are defended vigorously. Red squirrels do not tolerate other individuals on their territories and rarely come into contact with their neighbours.

They are, in other words, the boreal experts on social distancing. 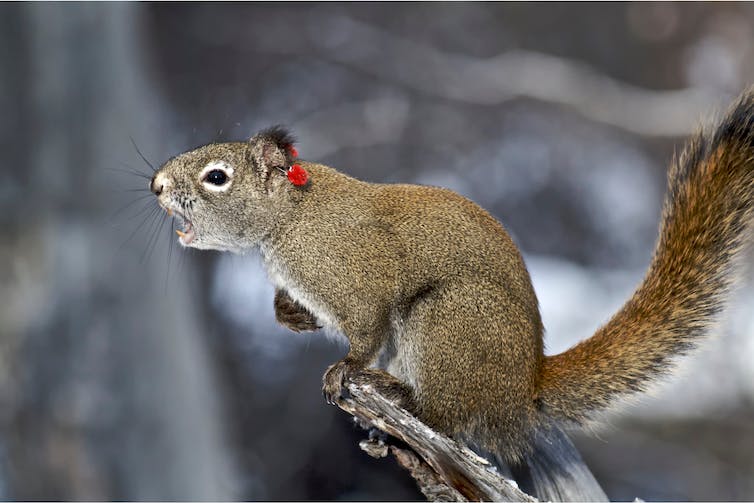 A male red squirrel lets out a territorial call — called a rattle — at his neighbours. (Ryan Taylor)

Solitary, but not anti-social

But despite being the loners of the North, our recent research shows that red squirrels, although they live most of their lives in isolation, maintain important relationships with their neighbours that have benefits for survival and reproductive success.

The value of social relationships for humans and other group living mammals is well-established. As science journalist Lydia Denworth’s recent book Friendship makes clear, maintaining these stable social bonds with others has tangible benefits for our health and can even enhance our lifespan.

But what about for a solitary, territorial species that spends most of its life living on an exclusive territory with little physical contact with other squirrels? Could social relationships still matter for a species such as this? We thought they could.

We recognized that while red squirrels rarely physically interact with each other, they regularly communicate and interact through their rattles. In this way, red squirrels engage in recurring interactions with squirrels that live close to them, facilitating the formation of social relationships that might matter for their survival and reproductive success.

Using 22 years of data collected as part of the Kluane Red Squirrel Project, a collaborative research initiative run by researchers from Canada and the United States, we set out to explore whether living near relatives or living near familiar individuals (those with whom a squirrel shared a long-term social relationship) could have benefits for red squirrels.

By individually marking red squirrels with unique ear tags and following them throughout their lives, we could keep track of key information like where they lived, how many babies they had each year and how long they survived.

This provided a detailed picture of the animal’s social environment, including whether they were related to their neighbours and how long they lived next to them. We could then ask how these different relationships with neighbours influenced survival and reproductive success.

What we found was surprising.

Living near family, we thought, might provide important benefits, as kin share genes and therefore should be more likely to co-operate with one another. Indeed, previous research has shown that red squirrels might help relatives by nest-sharing in the coldest months or adopting orphaned kin. But despite our initial expectations, we found no benefits of living near kin. 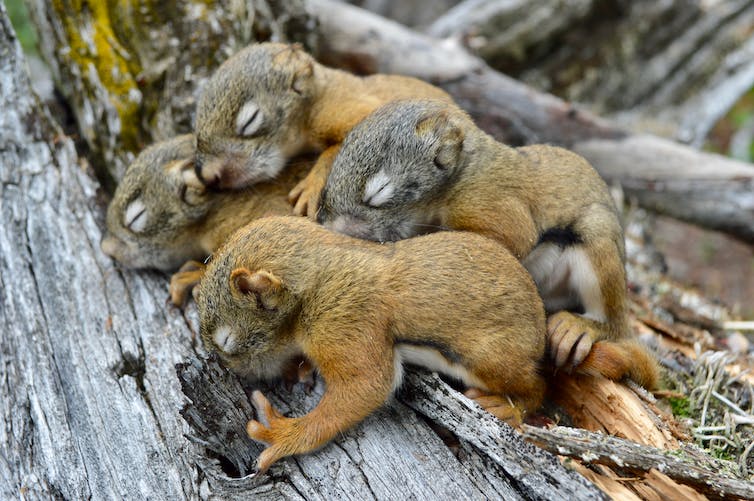 Instead, we found that having familiar neighbours (individuals that a squirrel has lived next to for a long time) had substantial benefits for both a red squirrel’s chances of survival and the number of babies they were able to produce each year. Having these long-term stable social relationships mattered, even for an apparently solitary species.

Why might this be? Think about it this way.

Imagine you just moved into a new house. You don’t know your neighbours and so might not trust them. You’re probably going to be cautious about locking your doors at night or making sure your security cameras are on when you go away for holiday. But the longer you live next to these same neighbours, the more you get to know and trust them. You recognize that your neighbours are not going to break into your house or steal from you, and so you can relax your defences.

The same thing happens for squirrels. When squirrels live next to one another year after year they develop bonds of familiarity. These long-term neighbours enter into a gentleman’s agreement — they are less likely to pilfer from each other or fight about territory boundaries, which allows them to reduce the time and energy spent defending their property. This is a well-established phenomenon in territorial species called the “dear-enemy effect.”

What was particularly surprising to us was how important these long-term social relationships were for squirrels in their later years. For older red squirrels, maintaining familiar neighbours could offset the declines in survival and reproductive success associated with ageing.

While growing a year older might normally result in a decline in a squirrel’s chances of survival, those chances would actually increase with age if their neighbours remained the same.

In theory, this could lead to the evolution of longer lifespans, but while we don’t see evidence of this phenomenon in red squirrels, it raises an interesting question about the role that social relationships might play in the aging process. As we continue to search for solutions to living longer, healthier lives, accumulating evidence seems to point toward social relationships as being the anti-aging solution we’ve all been looking for. 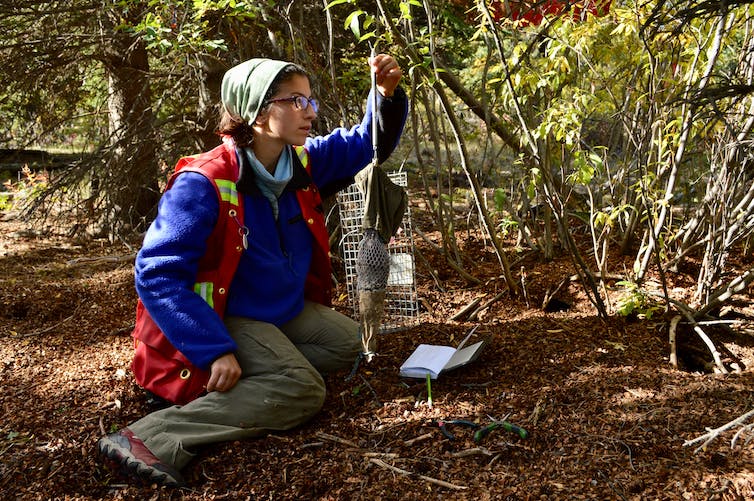 Female red squirrels are weighed to assess their reproductive status as part of the Kluane Red Squirrel Project. (Erin Siracusa)

The devil you know

But while these long-term relationships among red squirrels certainly do not constitute friendships as we think of them, our findings open up an interesting possibility that squirrels might actually help one another.

Given how important familiar neighbours are to reproductive success and survival, red squirrels could benefit from keeping their adversaries alive. So against all evidence to the contrary, red squirrels might co-operate with their competitors, because if you’re a red squirrel, it’s better the devil you know than the devil you don’t. We don’t know what this co-operation looks like yet, but it’s an interesting avenue for future research.

So as we continue to take physical distancing and social isolation measures, it’s worth remembering that red squirrels build and benefit from long-term social relationships with their neighbours — from a distance.

Even in the midst of a pandemic, we don’t need to be in physical contact with one another to benefit from our social bonds.

Psst! This Article Has The Secrets About Real Estate Investing You Want To Hear

Andressa Urach Naked Moment to Get Revenge on Cristiano Ronaldo

- Former Brazilian commercial sex worker (PSK), Andressa Urach, admitted that she would launch a grudge shortly after being